The commandline has finally arrived, and Dependencies are on their way

Yesterday i merged the Commandline to the Masterbranch. After some little additional changes, it seems to be ready. If you’re using the WebSetup, simply do an Update, the Commandline (DPM.exe) will appear in the Bin-Subfolder. Otherwhise you’ll need to recompile it manually. The WIKI has been updated accordingly.

Please redownload the Setup. The last version used some outdated source and the new one includes some fixes.

For now the Commandline offers the same functionality as the GUI-Version. You can Install/Update/Remove packages or inspect them. My new favourite is the UPDATE Command. This one checks for all pending Paclage-Updates and executes them. This will simplify the task of keeping your environment uptodate!

There is one little disadvantage right now: I still haven’t added support for local repositories, which means the Commandline pulls form the Online-Repository(Aka GITHUB). However in most automated scenarios it is better to have an offline repository. These will be added in the future. But for now, enjoy the new possibillities of managing all your packages across all your IDEs.

SOmething which has been in the taskpipeline for way to long are dependencies. Those allow you to specify which packages your Package requires. The result is that Delphinus can prepare (i.e. install missing Packages) before installing yours. In my developmentbranch i modified the UI with a new Button. This one can display the Dependencies (direct+indirect) and which action the Setup will execute.

In my example, i created a testpackage which requires multiple packages. One is already installed, one is to old, and one must be installed. 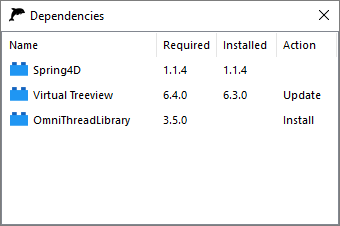 That’s all for now. Hope you enjoyed the update!